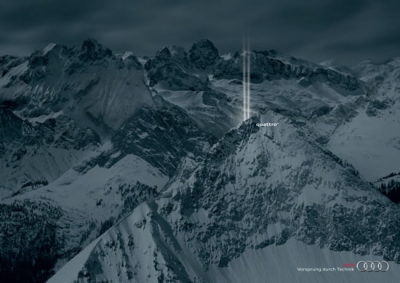 For this year’s Design Miami/ Basel, Audi is working with the Hamburg–based scenographer Tim John to create a unique installation entitled “Home of quattro”.

In February 2013 Audi celebrated a very special event – the five millionth Audi with a quattro drive system. This number is a testament to the leading role played by quattro.
No other premium brand in the world can claim such high sales figures for a four-wheel drive.

quattro is more than a technology – it is an icon. The name simultaneously represents driving safety, sportiness, technical competence and a dynamic attitude that does not let even adverse road conditions hold it back. The success of quattro models both on the road and in motorsport have contributed to this iconic status, as did a legendary series of TV commercials – beginning with the impressive 1986 feature in which the Audi 100 CS quattro climbed a ski jump in Kaipola, Finnland, on its own power.

At Design Miami/ Basel the spotlight is on two extraordinary Audi models:
The new Audi RS 6 Avant, which made its debut in March at the International Motor Show in Geneva, and the legendary Audi Sport quattro from 1984.

For “Home of quattro” Tim John uses the art of paper-cutting to create a world portraying important milestones in the history of the legendary four-wheel drive. Since opening his studio in 2007, Tim John has created handmade, intricately-detailed, interactive exhibits, static objects for decoration and sets, as well as installations extending over entire rooms. His work is in combining classical imagery and forms of presentation with modern media.